No Service on the Activation Day

No Service on the Activation Day

I've used several broadband services in the past but had not experienced anything like today with Vodafone.

Upon purchasing the package, I was given a tracking link for my order. It worked on the first day and since then it always said the order cannot be found.

A few days later,  I was phoned and told my activation date will be postponed by 8 days than the originally proposed date. I was told it was due to some problems OpenReach had to do some extra work. This was never the case with other providers as my phone line has continuously been operating without issues in the last 7 years. Can anyone share some light on what this work might be?

This morning, when my last provider cut off the service, I started installing Vodafone router. Previously with other providers, it was just plug-and-play and near-zero downtime. However, there was no internet connection this time. I started investigating.  The phone line is working, so at least that's a good starting point, however, if it hadn't been taken over by Vodafone, my old service would still be available. I logged into the router's webpage and it showed "no connection, no IPv4 address" on the front page. Then I did a diagnoses test, it showed "Data PPP connection Disconnected". 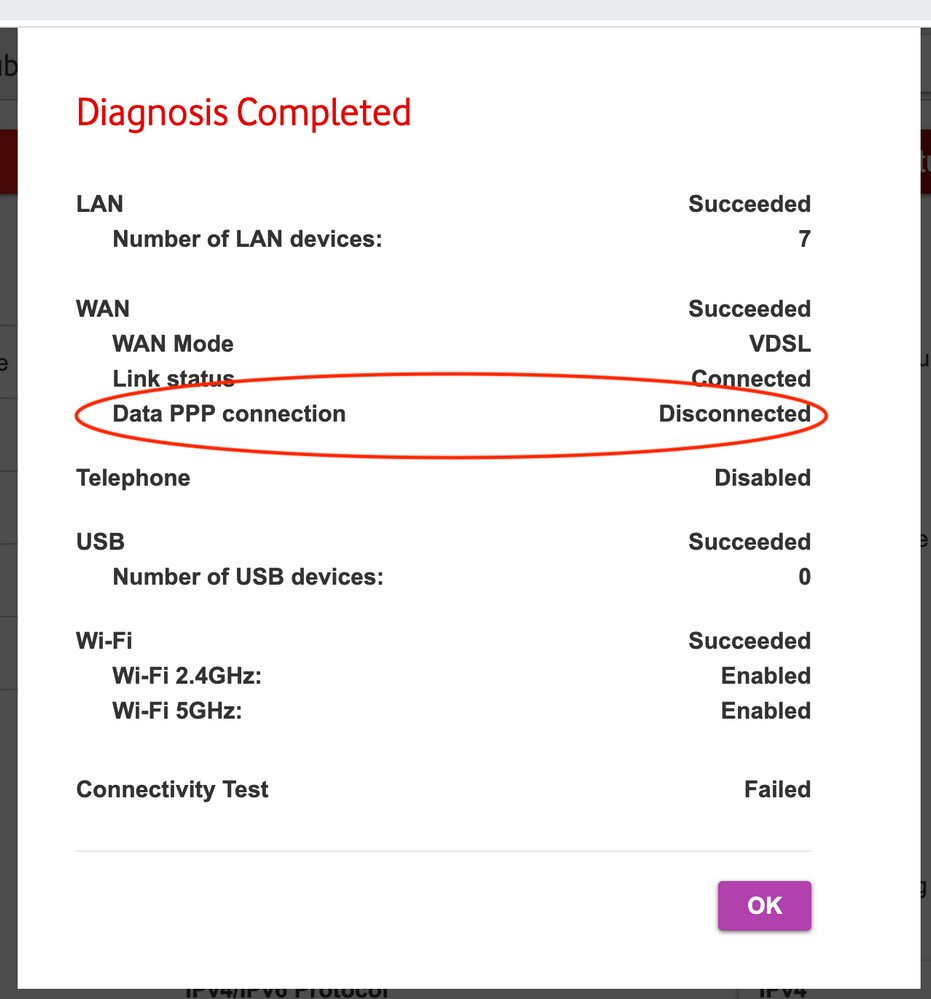 I called customer service. The lady there was very friendly. I followed all her instructions by resetting the router, and plugging it into the master phone socket instead of the usual one. We even took off the cover of the master socket and tried to connect directly. None of these worked. She suggested it may take until midnight for the activation to happen.

The experience so far has been really unsatisfactory.  I really hope it will go live today, however, my experience so far doesn't give me much confidence. The friendly lady is going to call me again tomorrow to check the status. I appreciate her help, however, I nearly never spoke to a broadband customer service representative in the past 5 years with other providers.

Since creating the post, I've done a bit of reading on this forum. This post describes exactly the same issue as mine.

Same error in the router's Event Log under Status & Support in Expert Mode.

Apparently many people had the same issue. It took a good couple of weeks before the author's problem got resolved. He had to speak to team 1, team 2 and eventually team 3. I have so far only been able to reach team 1. As mentioned above, the lady was very helpful, but then they are all doing the same procedures of router resetting.

The serious advice on the post is to go with another provider in order to save time money and anger, sigh...

Hi there @cliffxuan - thanks for your posts and for explaining what's been happening. I can understand your frustration and I'm sorry for the inconvenience caused by this.

We'll need to take a look at your account in more detail, to see what the issue is and what we need to do to get your service up and running. Please drop my team a message via social media and we'll take a look into it for you.

Please note, if you include a link to your post along with your username, you won't need to explain yourself again 🙂

hi @Amanda I started a conversation on Twitter last night. Looked like it was an automated service (understandably) and the last message I got was this "A member of the team will be in touch shortly to take a closer look."

Thanks for letting me know, I can see your message @cliffxuan - we're a little busier than usual at the moment and one of the team will be in touch soon.

I appreciate your patience in the meantime 🙂

An update on this issue.

My broadband was activated the following day in the afternoon after a third reset of the router. The customer service representative on the phone was friendly and helpful. She followed the issue through and called me multiple times to check the status. It has been working as expected ever since.

I also contacted through web chat and Twitter. The different teams didn't have access to the same report/data and therefore had different views of the problem. While the person on the chat thought further work from OpenReach was needed, the person on the phone was very certain it wasn't a problem. The web chat person was able to give me the job reference, however, the one on the phone couldn't even search the job reference.

Hi this is the same issue I am having

Same error in the router's Event Log under Status & Support in Expert Mode.

It was might to activate on Friday it is now Sunday and so not working been on the phone hours. Let's hope its today!!