Can't watch anything on Amazon Prime.

And I'll be writing to Ofcom in a moment.

"Vodafone: All our agents are currently assisting other customers. The next available agent will be with you shortly. Thank you for your patience."

I'm trying to remain patient but am losing any patience I had left. Also asked to send repeated speedtests through to their "Converged Tech2" team. I'm not expected them to come back and say "oh we found the issue, it was us not having enough backhaul or bandwidth".

Like I've said before it's such a shame because Vodafone's mobile network is actually pretty decent for data and voice.

Yep agreed - Ironically Ive just signed up to a very good 12 month Vodafone Sim only deal with cashback as my previous mobile provider decided upon themselves that I was no longer 'allowed' to use the data I buy every month, for the purpose of streaming TV.  The only reason Im having to use 4g for this in the first place is because my Vodafone home broadband simply buffers every 5 seconds but works perfectly on Vodafones 4G - lol

As I wasn't able to contact an advisor, I've just fired my complaint off using https://www.resolver.co.uk

If it's not satisfactory resolved, they help you escalate it to OFCOM.

I would recommend everybody with this issue does the same as me.

If Vodafone realise just how many people are unhappy, they may be forced to look into the issue correctly.

Else if our complaints are unresolved  OFCOM will get inundated and have to look at Vodafones practices.

It literally took me less than five minutes to complain.

I'm not sure if this is helpful what so ever? 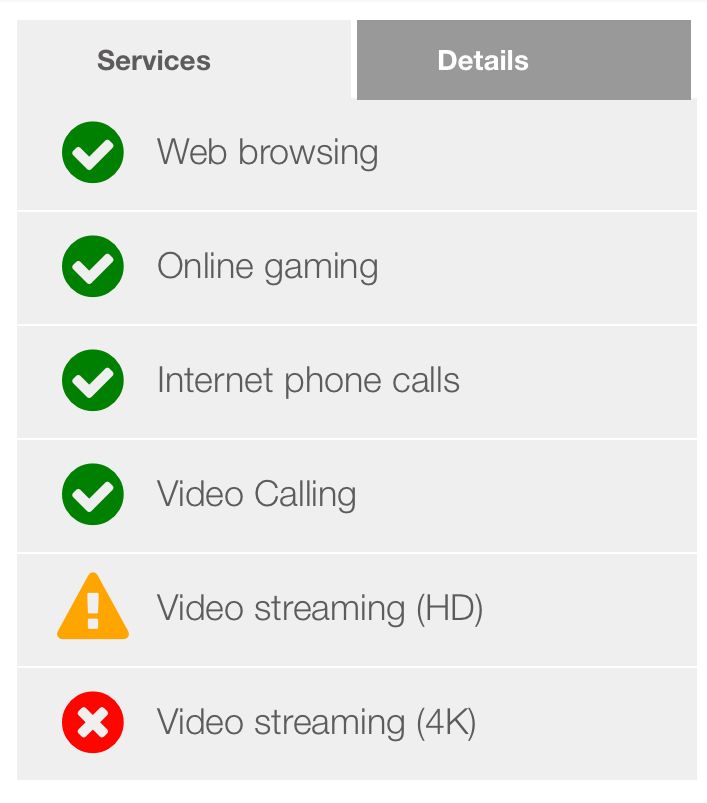 So I can basically achieve little more than I could ten years ago!

In this thread I performed some tests with a friend (who gets full speeds on fast.com) to try and rule out as many variables as possible. The last test I did was very interesting. Here is a summary: we both downloaded exactly the same file and got a huge speed difference. The routes to the host are identical apart from the initial dslgb.com one yet I get slow she gets fast.

Yet that host is also used for any outgoing route of mine and some of them are at maxed out speed.

Pretty much circular,   it should be against trade description to call themselves a broadband provider.

We are 8 weeks in since this problem started and the kinder garden moderators on here still think it's a invidiual user issue, I don't think any of them have been trained in any kind of I.T background - most are just copying and pasting from a script.

My personal advice get your price down as much as you can go then install a 2nd phone line and get a new broadband connection then cancel down vodatheives once your out of contract - positive news is that ofcom have been in touch with me and are requesting some tehical details, they are also in contact with a number of other users so hopefully some legal progress is in the works against this company.

Stop Copying and Pasting - EVERYONE has this problem on here why not um.... fix it?

report it as a major problem instread of pretending it's an invidiual user issue,  Are you actually trained or just copying and pasting everything?

Hd streams buffer on all devices

Hi. For months now hd streams constantly pause. Cant watch any hd channels without constant pausing ever 10 seconds or so.

Ive tried online help but they never see it through and i just give up. Have spoken to help and they always promise to call back but never do.

Been plugin and unplugging cables. Speed tests etc etc. But still my broadband at ho.e.wont let me stream HD content without pausing.

I realy do need some serious help as its driving my family insane.

Im supposed to get 70 plus Mb. Why is this happening? Help!!

A lot of customers, not all apparently, are suffering the same problem. It started mid November 2018 and causes a problem with some streaming, downloading etc. Some speedcheckers are unaffected and will give you OK results, others (including amusingly the "London - Vodafone" ookla/spedtest server) will give very poor results, "fast.com" the speedtest service aimed at testing Netflix is similarly affected.

From the looks of it it is a big issue with some parts of the Vodafone core infrastructure, undercapacity or throttling.

Some users are using VPNs to get round the issue, as the traffic gets routed differently, but you shouldn't really have to.

It's the network if it is to slow then

Seeing the speeds at which my IPTV max out, on a 38Mbps Fibre connection with 40Mbps sync speed anything beyond 4.2 MBps will not work. There is definitely throtlling going on, I am waiting for either Vodafone price increase or might buy out the contract just to get out of this mess.

Totally agree with you on the throttling Vinny.

It isn't affecting everyone though, which is interesting. Possibly affecting all customers in certain geographical locations?

@RIPTwitch - If I understand your twitch output correctly it looks like your download speed has absolutely no chance of keeping up with the 1080p bitrate (2-4Mbps vs 7-9Mbps). It looks like most of the time it keeps up with the 720p one, but at times dips below it so you probably get buffering then.

Vinny and RIPTwitch - would you mind sharing where you are located?

Out of interest what services are you streaming (e.g. Netflix, twitch etc) and whereabouts are you located?

I've been suffering from issues while streaming video (netflix, twitch) for the past 3 months and thought it was a problem with my wi-fi. I came across this forum and after reading other people's posts realised it's not.

Twitch is unable to maintain 1080p and netflix can't reach 4k. Looking at the statistics it looks like the download rate will oscillate between 2.4 and 2.6 mbps so it looks like it might be deliberately throttled per user.

So just another complaint to add to the pile I guess.

Re: Streaming capped at 2.5 mbps

Hi Next, welcome to the club!

Would you mind sharing whereabouts you are located? I'm just trying to gather a bit of data on other affected customers.