Better than what I am getting lol.  Tested the 1GB link at work just now- 8.4mbps (BT 75mbps connection)

If I use a VPN (common theme

) the speeds do improve greatly from the test links.

If I also try it using IDM (Multi connection) this also improves the speeds. Still, nowhere near the speeds I would expect from my actual connection speed.

OpenVPN on router. It will add £2 for your monthly bill. Do you think is worth it?

I would say 100mbps line usually is sufficient for two 4k streams if your speed isn't throtelled . On difference you can get VPN provider.

My worry what ping will suffer and affect online gambling

Got to have a good ping to support that online gambling habit!

If your router supports openvpn it is a cheap option.

On a 100mbps connection in theory you should be able to stream two devices using a vpn if you don't get too much drop off.

I haven't run any equipment so far that required a low ping time, but my average was between 30 / 55ms (speedtest.net) when testing a connection to a vpn. So this would be low enough for online gaming, not so sure on gambling sites.

Maybe you should allow customers to leave vodafone or reduce the fee to quit,  I think this would be fair because at the moment you have a lot of very angry customers and once that 18 month contract dates up will be leaving for another provider no matter if you fix this or not.

I tempted to try flash my router. I found when I bought good grade commercial one I stopped having any problems and VDSL ping went from 14 to 9ms.   On Gigafast Google server  ping is around 5ms.

However in both cases VF broadband was terrible with Head Office involved.  Recently I have 6-8 Mbps. I was ok with 40mbps (from 100 line) It seems story made a circle.

Same issue. 32 hops to get to a netflix server . Pixalated unwatable streaming tv. Good to read this as it least it explains the strange behaviour. Speedtests vary massivly depending on server, vodafone speedtest servers usually slowest. Nperf pretty much full speed. Have a 72mbs sync line, but goes down to unwatchable streaming. Many applications don't work. Had an ticket out with executive office, a while ago.. Service has always had problems but the throttling or bizarre routing vodafone does. This service isnt ready for paying customers. Especially considering the pitiful speeds Openreach is offering to not be able to then provide 72mbs, when parts of the world including Vodafone Spain offer 1000mbs or South Korea 10Gbs. Bucketshop internet.

At the least let customers leave their contracts without penality, as a respected global telcoms company. The service is embarrassingly poor. Having had it for over 1 year. I've only had a 3 month period were it was working adequatly .

The marketing on the Vodafone website  - "Downloading a 100GB game usually takes hours, but with Vodafone Gigafast Broadband you can become a legend in minutes"
Ok, I will go for 900mbps / 900mbps please.
Speedtest result 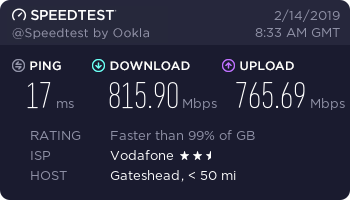 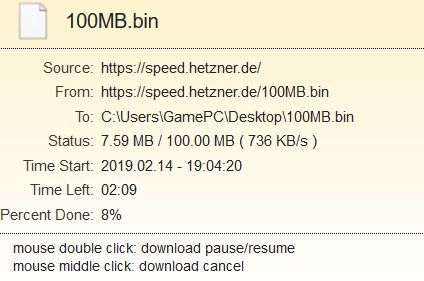 I think it should read the following.
The marketing on the Vodafone website  - "Downloading a 100GB game usually takes hours, but with Vodafone Gigafast Broadband you can become a legend in decades"
1 Thanks
Share
Reply
View more options

cant get my head around this ,what do you think this means

Well. It explains a lot. Traffic shaping depending on content.

VF would claim most of games and software contain video

But VPN still loophole as big brother can be bothered chase you. VPN isn't largely popular in UK

Another random snippet of information which may be useful... I was having a problem with multiple WAN disconnects in January. I was sent a replacement router which didn't help. After contactiing tech support again on Jan 17th I was told that some settings (which were not visible to the user) were misconfigured and they'd fix that remotely. I was then asked to hard reset the router.

The connection then stayed up for almost a day (which was rare for a VF router on my line).

The strange thing was that speedtest results were nearly maxed out including to Vodafone London and www.fast.com. I was getting better results than I'd ever seen before.

This didn't last and it reverted back to slower speeds and multiple disconnections a few days later. I tried a third party router which has been rock steady and not disconnected since since I got it.

What really really puzzles me though is what the heck happened which upped my speed so dramatically? Was it just me or does anyone else with speed graphs see a peak around Jan 17th?

You have been assigned different user profile or your usage history been cleaned. As soon as you collected certain amount of downloaded data you waspossibly  reverted to heavy users bunch. Your speed was capped again.

When u use third party router in bridge mode it VF would not drop. Rule of thumb and trial (read forum) VF support Max 2 devices connected same time without crashing out.

Bad thing what VF keep saying here is no throughout download throttling. Fact : here is super heavy . If they said they manage traffic .Then a lot of users wouldn't buy product. VF defrauding you and me

I turned on iptv today , great speeds , no buffering even on HD. Voda have solved it !!! SORRY , forgot I moved to BT this morning , use BT BUYOUT SCHEME and switch to a company that doesn’t throttle (yet)

In fairness, I can get a 66Mbps speedtest to BT Lancs and 45 to VF London at the momenet, so things look much better..... The traceroute on this suggests the issues might be outside of VFs network (makes a change!)

My Sync speeds are certainly higher than I was getting at the tail end of last week. These are just sync speeds of course.

I tried the same download tests using a trial version of a third party app in this case "Internet Download Manager" which forced the download to use multiple connections there was a big change to the download speed.

I ran a 550meg driver download from NVIDIA - single speed averaged 4mbps the three times I tried it.

Why single file downloads are so crippled I do not know. At work on BT - same tests 6mbps or above on a 75meg connection.

This obviously affects streaming services and the like.  Currently I am trying to download Visual Studio for installation on a non-internet connected network.  No longer it is a couple of ISOs, but instead thousands of little files, equaling to a good 30gb+ of data which are all downloaded, one after the other.... no option of splitting and using multiple threads 😞

I don't envy your task one bit.  That will take an absolute age if they are downloading in kbs.

I'ev just checked my router logs, and it managed a little speedy peak, although it could have potentially been a lot faster.  Sure you can spot when the download started!  Have just read that VS 2019 will be out soon, so the fun will be repeated int he not too distant future!

Shame it wasn't a bit faster, given the sync speeds....

Good job I didn't try that download tonight, even the "only VF approved" speedtest server on the entire internet isn't performing very well this evening...