Here's the proof of throttling - Once I vpn out of the vodafone throttling wall twitch is working perfect at full video source.

It looks like throttling is around between 3.8 - 4 - once I hit up onto the vpn you will notice i'm up at around 10 and playback is perfect

There's too many other customers on here reporting the exact same issue for it to be a problem our side - I've tested multiple routers etc to rule that out - I created this new thread because now we can see it really is a vodafone problem.

this is my speed 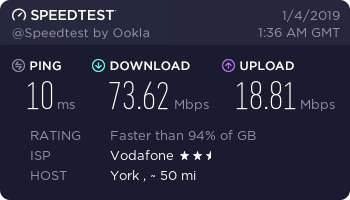 Can you give an estimation when this will be changed back?

Next time it happens if you open up a command prompt and enter "tracert twitch.tv" you'll probably find that it takes a load of hops for your computer to reach twitch.tv, many of those intermediate hops within the vodafone (ex) Cable & Wireless network.  This only seems to happen at peak times!  So it's hard show you at the moment because it's all kind of working okay it being 6:45am.

If you try that same tracert during peak times the numbe of hops may well exceed 30!

*I'm just trying to give an explaination of what appears to be happening.  So it doesn't appear to be throttling, but it does appear to be VERY poor (and totally unacceptable) routing.

Yeah getting the same - so how do we fix this, when I hop onto the vpn it appears to be going via a differnt route, I kinda see what's happening now.

When connected to vodafone

I think there are actually two problems

1: the routing is borked to many locations.

2: the single channel speed that drops to <4mbs at peak times.  ( even to properly routed locations)

A note of caution:  Using a VPN can (probably will) by its nature mask the route you packets travel while within the VPN system, it's kinda part of the whole idea of it!  If it means that you can get your packets out of the VF/C&W network quicker, that's still probably a good thing though!

Should not need to fire up a vpn though mate and I’m experiencing exactly the same behaviour you guys are! So Vodafone what are you going to do about this ?

Nothing, as they simply don't care.

Isn’t it strange how the VF mods haven’t uttered a peep. Why won’t one up them pick up the batton. There must be loads of us affected - and a lot won’t realise that they are

Another one with the same issue.  Spoke with tech support and still awaiting a call back.  Won’t hold my breath!

Anything Dave? The Tech team are a waste of time.

Not a thing back from anyone.  Tech 2 were very reassuring telling me “not to worry we will get this sorted for you”. Waste of time.  Suppose I will give them another call.

Maybe point them to this thread,   I think this pretty much explains what the problem is - and if they need further support i'm sure we can provide it for them lol

Nothing on there network would ever max over 4meg for iptv - it's actually a clever way of throttling to the customer,  but at the moment vodafone's broadband is not fit for purpose it like being back in the 90's - i'm just pleased we can use a vpn to get around this issue for now but it's not ideal.

if anyone needs a vpn check out https://protonvpn.com service is fairly cheap and decent.

Just wondering if anyone else might be having problems with live tv streaming.  Its constantly buffering every 5 seconds but it works fine when I take it to a friends house.  Up until around a month or two ago, it was flawless.  Im paying £40 a year for this tv service and at the moment its unusable.  Ive tried on my phone, on my laptop and on my PC (which is unfortunately connected to the router via a Powerline adapter as I have no phone sockets in my lounge) and its the same on all 3 devices.  I have borrowed a super long CAT5 cable to test a direct link to my PC from the router and will try that later on today when I get home.

I contacted the live chat guys about this a couple of days ago and told me to split my wifi, which I already have been doing for about the last 12 months, and asked me to put some google DNS addresses into my router which I have done and then they told me to manually choose a 2.4Ghz channel and set my 5GHz to Auto.

I did this (chose several 2.4Ghz channels and no improvement) but lost my 5GHz connection as I am not broadcasting my SSIDs.  As soon as I broadcast my 5Ghz SSID on 'Auto' channel it worked fine so I changed it back to manual and selected a 'quiet' channel and rehid my SSID like it was before and that was that.

They checked my line and said there was no faults (they copied and pasted the results of the test in the chat) and I am syncing at 55MBps and they guarantee 40Mbps. So apart from adding some manual DNS settings to my router (primary 8.8.8.8 and secondary 8.8.4.4 or it could have been 8884), all the other advice I was given I was already doing.  Speedtest (ookla) also showed that the speeds were good (as long as I didnt use Newbury server - for some reason that shows half the speed?).

General browsing seems to be working fine and im streaming my Xbox (connected on 5ghz) to my PC (connected via powerline adapter) no problem - its purely my live tv streaming program/app.

Has there been a restriction put in place recently?  If so, I will be leaving Vodafone as it works fine at my freinds houses who are not on vodafone.  Ive not got the router firewall on either.

Read the first few pages of this forum......

I assume theres a wider problem then thats affecting me too then?  No one else has mentioned problems with streaming live TV that I can see so thats why I posted.

I am having the same buffering issues 😞

It's very strange that you're only experiencing issues with this one particular service @JimboAccy, especially after all the thorough troubleshooting you've done.

So I can take a closer look into this, I've sent you and @Gopteruk a private message with details on how to get in touch directly.