I'm not getting anywhere with 2nd and now 3rd line regarding this issue I've raised - So I'll share it here. I've been on and paying for Gigafast (GF) 900 for a little over a year, and it's been ok-ish - Download speeds sometime tank in the evening.

More recently, perhaps starting about two weeks ago, speeds seem stuck around 100Mb each way and I complained and raised a ticket. This is when 2nd line asked to disconnect everything from the router at least 3 times a day a few hours apart, and run a speed test from an ethernet connected device which I did. Each one was 96-97 Mb each way. It was when poking around the routers advanced settings I see the fibre link is in-fact speed limited to just 100MB which I raised with VF: 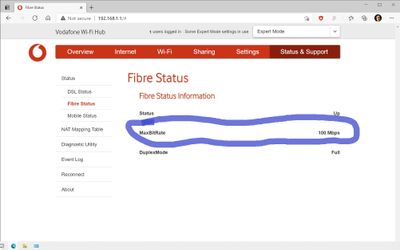 The outcome to this issue you may ask? Apparently they don't have capacity locally which is why it's reduced. I'm still paying for the 900 speed as they've said I can't lower it to the 100MB it's actually running at or just leave because I'm still within contract. This doesn't sound right, as I'm paying for something they can't supply?

This sounds like a problem with the ethernet cable between the ONT/(G)PON and the router.  It might be worth trying a different category 5e or better cable if you have access to one.

It's a Cat7 10M cable from the wall to the router, and swapped it but it makes no odds. Rebooted both devices a few times and still stuck at 100MB.

VF specifically said capacity, and I've assumed they are talking about the outside capacity rather than my LAN going a bit weird?

Raise an official complaint, nothing will happen unless you do.

Ty for the heads up, I've already got a complaint open and was contacted again today about it to run through troubleshooting.

The very brief takeaway is they tried claiming my PC can control the link speed to the fibre box, and they tried making me go thru settings on my PC to ensure it was connected at 1GB/Sec (which it was and always has been). I told them that will make no difference, as it's not my LAN side connections that are slow. Feel like I'm going round in circles, so Ofcom...?

You can also requested all the notes .phones calls etc that vodafones holds on there computers about you . This can help if you want to make a complaint