Having switched to Vodafone super fast 2 broadband (guaranteed 55mbps) I have only received that speed for a couple of days since I joined 2-3 months ago. The strange thing is that the speeds now seem to be capped at 10 mbps, almost as if I’m in a tariff which only allows max 10mbps. I consistently get speeds between 9-10mbps. I have been pushed from pillar to post having contacted Vodafone what seems like every other day. I have split the WiFi and changed the channels to the recommended channels on both 2.4ghz and 5ghz connections to no avail.

Technicians have come out and worked on the line which seemed to fix the issue temporarily,  however since the speeds dropped they haven’t returned to anything higher than 10 mbps.

Considering I received the minimum speeds for a couple of days this seems like an issue about maintaining the speeds.

Hopefully Vodafone sees this and actually provides me with some solution.

may be worth a visit.

In the modem you may be able to view something like this....

There is an app to also monitor/view the situation. 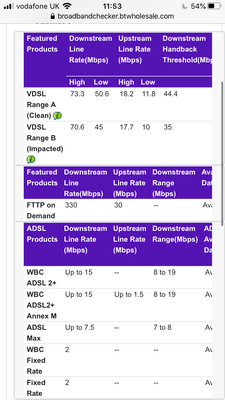 Thankyou I have used this link but can’t seem to find the information you’ve provided there. I’ll post a screenshot to what I’ve found.

Screenshot doesn’t seem to be working properly but the download speeds displayed from that result shows highs of 73mbps and lows of 50mbps. However I’m only receiving 10mbps.

Thank you. Hopefully it gets approved soon.

I’ve just logged into to my router settings via a browser to discover on the overview page it says VDSL 10 mbps. Does this mean my router is maxed out at 10 mbps?

You need some intervention.

Hi @jordanvenner 👋 we will need to some more digging into this issue and some further checks, if you can contact the team by clicking here and if you can include a link to this thread so the team can see the screenshots you have already attached and we will be more than happy to investigate further.

What do you mean by intervention? A BT engineer is coming out to work on the line today but may not visit my home address. Is the above picture something I need to show an engineer/Vodafone representative?

I asked for a moderator to help out as my attempts were worse than useless.

What Openreach will do or ask I have no real idea.