Is anyone else experiencing terrible speeds both download and upload? I am paying for 70mps and currently recieving less than 1mbps on some tests. I contacted vodafone and there is nothing with my line as i am getting max speed to my router. Terrible technical service and not the 1st time iv had an issue in my short 6 months here. I want out!

Internet Speed unusable in the evening

Line is connected at 56Mbps, get speeds close to that first thing in the morning but by the evening lucky to get 4Mbps.

Noticed that the router is getting a few FEC corrections on upload.

I'm having the same problem, connection is good first thing in the morning and gets slower as the days goes on.

All vodafone technical support have done is confirm there is nothing wrong with my line.

Exactly the same as me. Full speed this morning and  less then 1mbps as we speak. I have the test results to prove it and they tell me my line is fine also...iv lodge a complaint

For the past 6 months I have had no issues but the past 4/5 days have been awful. At peak times my speed will drop to less than 5mbps, if I check this in the morning I get around 70mbps which is correct.

I have seen a number of people raise the same issue on twitter. I believe Vodafone are either throttling our connections to help with the load or there is just too much congestion on the lines which causes the issues at peak times.

They need to resolve this ASAP or I will personally be leaving as the broadband is not even usable during peak times.

Screenshot attached to show my speeds throughout today and it’s been the same the past couple of days. Fine in the morning and then slowly gets worse as we reach peak times. Issue is the same over Ethernet, clearly an issue  their side but when you speak to Vodafone they say there are no issues.

Re: Internet Speed unusable in the evening

think its a vodafone issue.. ive been in same boat for 2 days gone from 72 normay down to 1 mbit up and 1 mbit down..been unusable.. i noly noticed when i payed for a fottball match on nowtv and it was unplayable. 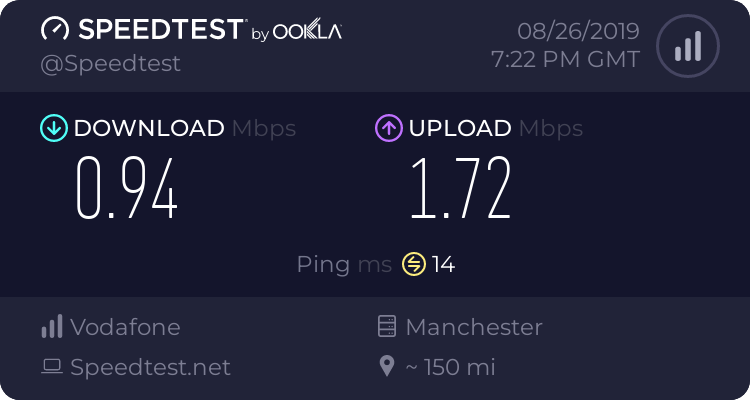 think its a vodafone issue.. ive been in same boat for 2 days gone from 72 normaly down to 1 mbit up and 1 mbit down..been unusable.. i noly noticed when i payed for a fottball match on nowtv and it was unplayable

As if by magic my speed has gone backcto full. I already have a tp link router plugged in to my vodafone router as their wifi is so poor i had to buy a £50 extender. Absolutley embarrassing and iv put a complaint in to leave. Still waiting to hear back. Clear being throttled and i have the speed results to prove. Im paying £25 a month for this.

My speeds were back to normal this morning too.

I don't have faith it'll stay that way tonight.

yes same for me..back to normal.. it did this yesterday though and by divertime was down to 40 then tea time down to 20 and from 7 onwards barely 1 down / 1 up

Speed test is fine for me this morning but I'm sure that will change when we reach peak times and the congestion/throttlings kicks in.

I noticed that Simon from the VodafoneUK twitter account acknowledged that there is an issue and their engineers are working on.

There is a lack of communication and a clear problem.

Speeds seemed to have fixed itself today....was getting 72mbps up until about 5 mins ago and then bang 2mbps.

Good job i'm out of contract.

Mine went down around 5pm. Posted on their twitter feed my speed lol

Hi, glad I'm not the only one. Speeds through the day seem fine. Tonight I'm getting 6mb download on speedtest out of my usual 50ish.  I noticed this has been going on since Friday night.  I don't have Sky, virgin or a tv aerial, so only use Netflix and Amazon Prime.  Watching tv is a bit rubbish at the moment with these speeds and family surfing the net.  No word form Vodafone on this yet?

Speeds back to normal today as well. Still not the 'guaranteed' speed, but that might be too much to ask

Went ok ffo a few days bit now back to the usual less than 1mbps. Still await a call back from vodafone over my lodged complaint

This is just terrible service and NOT acceptable anymore. Same for 9 days now.

Awaiting a call back from 5 days ago....

Last call I was told if we cant improve we will look at you being able to be realeased from contact early... joined Jan this year so will be pushing for that...

Vodafone need to sort this ASAP

It had been OK all week but now back to rubbish...

Wouldn't u think they would inform us of the problem  !

I'm in aberdeen but according to the lady on the phone just because other people are having the same issue doesn't mean it's the same issue...lol