So i have become a vodafone broadband customer in December 2020 . at the beginning till the end of January everything was so called normal. So from the beginning of February my issues have started …. Slow speed and drop connection….. First thought wi – fi interference – at the time I was still with Vodafone provided hub … so I spend some time here and bought tp link archer vr600 ac2100 and new box to model cable (round one).

So speed test will say I have 56 mbps but will take forever to run the test it just didn`t seems right so I did my homework and start testing with testmy.net and omg . Lan connected I get max 25 off peak time and 1-9 peak time pretty bad, but speed test will still show after 30 sec loading 56 lan and wifi . I just cant understand why . I Also asked some of my friends so test and compare between testmy.net and speed test well they all get pretty same result so how .

So can anyone point me where things could be going wrong and how to address this to vodafone.

I Also asked some of my friends so test and compare between testmy.net and speed test well they all get pretty same result so how .

Are you saying your friends are on other ISPs and are getting the same differences between Speedtes.net and Testmy.net or they don't get differences?

talk talk , EE and plus net we have tried and all have pretty same results on both test . Mine and few houses down the road (vodafone customer too) miles out . Peak time not like should matter I’m having anything between 1-9 speed

I suspect you are suffering the same as many on here, slow speeds at peak times due to Vodafone's lack of capacity.

When I first joined, after Openreach had cured a line fault, things were fine but as time went on the evening speeds have gotten slower and slower. The lowest I have recorded was 13Mbs and my usual off peak speeds are about 70Mbs.

The only recourse I can see is to complain and when they admit they can't resolve it ask to leave without penalty.

What speed does the BT checker say you should expect?

Okay, so Ookla/Speedtest.net are independent of Vodafone, but Vodafone have devices at some of their datacentres configured as speedtest.net servers.  These mean that you can see how fast your connection is at least as far as the VF server, and it's usually a fair measure.

If you are getting drops in performance at certain times of the day, most users seem to see these even when connecting to those VF speedtest.net servers.  So I think the general consensus is that the cause if probably congestion/over-subscription in the path from Openreach cabinet to VF datacentre.

If you want a different speed test site that seems to work try thinkbroadband.com, and also on speedtest.net try the single connection option rather than the preselected multi-connection option.

*I was going to suggest that you tried a speedtest.net server in New Zealand, just to see how they perform (295ms ping, 33Mbps up, 7.5Mbps down for me), compared to the testmy.net in the USA (23ms ping, 17Mbps up) but as you can see despite the greater delay my throughput to New Zealand is almost twice that of testmy.net

**The moral of this being that you will get different speed results depending on what server you connect to! 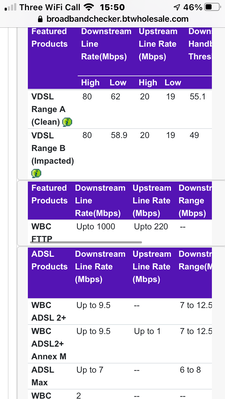 Well I was with plus net before and never had a problem. I can’t call this customer service if so many people are having the same issue and they don’t do nothing about it this is a shame .... I will write a letter to them coz this isn’t fair 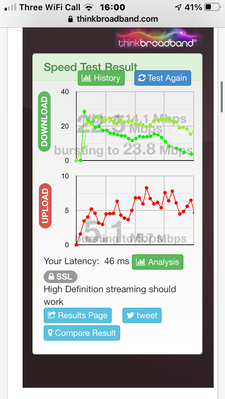 the result again are very close to test my.net but miles out of speed test.