Just wanted to ask a question .I have switched ISPs a few times over the past 10 years or so, and Usually there is some downtime around 20 minutes or so and the switch over generally happens from 9am to early afternoon. But when i switched to Vodafone my switch took place at 1am. As this has never happened before i thought it rather odd. I have read other posts on various other ISP forums saying their switch took place at 6am or early hours of the Morning and they just switched over the Router which on this occasion is what i did although this felt very odd.  Vodafone are not LLU as far as i am aware, ,and i was always led to believe that an Openreach Engineer had to do some kind of switch over at the Telephone Exchange But im pretty sure no Engineer is visiting the road side cabinet or the Exchange at 1am just to switch my ISP service over. So have i missed something or is there some kind of new switch over procedure that does not require an Engineer to visit the exchange and do some fiddling with wires. Am i still on my previous ISPs equipment. Just curious to hear any one else`s thoughts or views, I have not posed the Question to VF Tech Team as yet. Sadly my last encounter with VF support was nothing short of horrendous .I switched back to VF due to peer pressure from other members of my household complaining about the Wi-Fi with other ISP, yet the wired connection seemed speedier while playing online. Menus were loading faster, now back to being slower now i am back with VF the whole set up wired and Wireless seems sluggish yet speed tests are fine both over Wi-Fi and Wired connections but something feels off. Anyway that`s another issue i will deal with in time. Can anyone enlighten me why my Broadband switched over at 1am when this has never ever happened before when switching ISPs ,thank you for reading my moan.

There have been other post where they say they have switched over in the early hours, so I wouldn't worry about it. It's probably automated and doesn't need an engineer to do the swap any more.

Am i still on my previous ISPs equipment.

If you are concerned you haven't been swapped, check this site:

Menus were loading faster, now back to being slower now i am back with VF the whole set up wired and Wireless seems sluggish yet speed tests are fine both over Wi-Fi and Wired connections but something feels off. 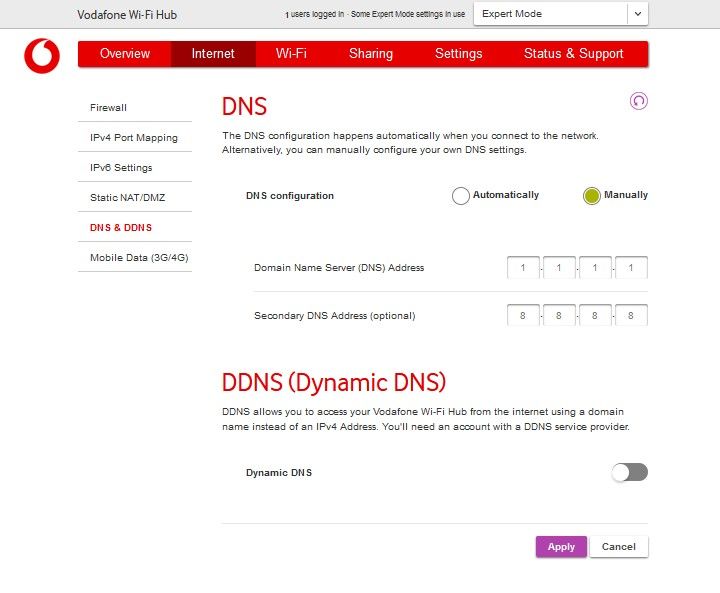 Thanks for the advice, I will switch over the DNS servers and see how it pans out .Thanks again for the help its very much appreciated.

Thanks. Its just that has never happened before, I guess i am on same physical connection at the exchange but possibly using VF backbone instead of previous ISPs,  Thanks for the input its most appreciated.