I'm also having the same problem when I click on "watch" and go into "viewing options", I click on "I subscribe to Mobile TV via Vodafone" and then .... nothing. My wi-if (as prompted) is temporarily switched off so my subscription can be validated, but nothing happening at all, just stays on the listings screen.

Hi @Sterry we're more than happy to look into your subscription further. Please contact us by following the private message I've sent you.

Hi , I am not able to use the mobile tv app. I am signed in to Sky but every time I click I am subscribed to Vodafone, nothing happens no matter what channel I choose. This has been going on for over 24hrs amd have tried live chat but not resolution as Vodafone say there is nothing wrong with my subscription  but sky say it must be a Vodafone issue. I have reinstalled the app numerous times and my wifi has always been off each time I try to make it work. I chose the contract because of the entertainment and am disappointed i cannot use it. Please help.

Hi @alimurdoch1 we'd be more than happy to look into your Sky Sports subscription further. Please contact via the details in the private message I've sent you. Joe

I am having the same issue.

Spoke to two different Customer Service people on Sunday and had different responses.  Eventually Joe said it was a problem with Vodafone since the 23rd December processing the subscriptions as Sky had a technical problem they needed to fix their end.

Missed a call from Vodafone Technical Team today but got the text asking me to sign up again via the link.  It worked!  Hooray!  My subsricption was active again, and I received a text to say this as well (similar to the text I had received monthly since my initial 12 month contract ended).

I have tried to use the app - still not working!

Now when I call Vodafone I get a 3rd Customer Services person telling me yet another story and blaming Sky.

I am having the same problem since yesterday and have been told its an issue with sky sports and they will fix it "very soon". Please can someone actually help?

I posted  that i have the same issue on here  before the New Year, I received the same a prompt reply everyone else has been getting requesting I respond to a private message which linked me to fill in an on-line form. I filled in the form but have not received any further response.

I'm sorry to hear you've all had a problem when trying to access your Sky Sports app. We've been advised this has now been resolved. If you're still unable to access the app, please log out and back in. This will refresh your subscription and resolve your access issue.

Hi Mark. Thanks for your reply.

Still no difference for me. Have tried to uninstall/reinstall the app and to restart the phone. Nothing works. Instead of the stream launching, I land on a Sky sign in page. 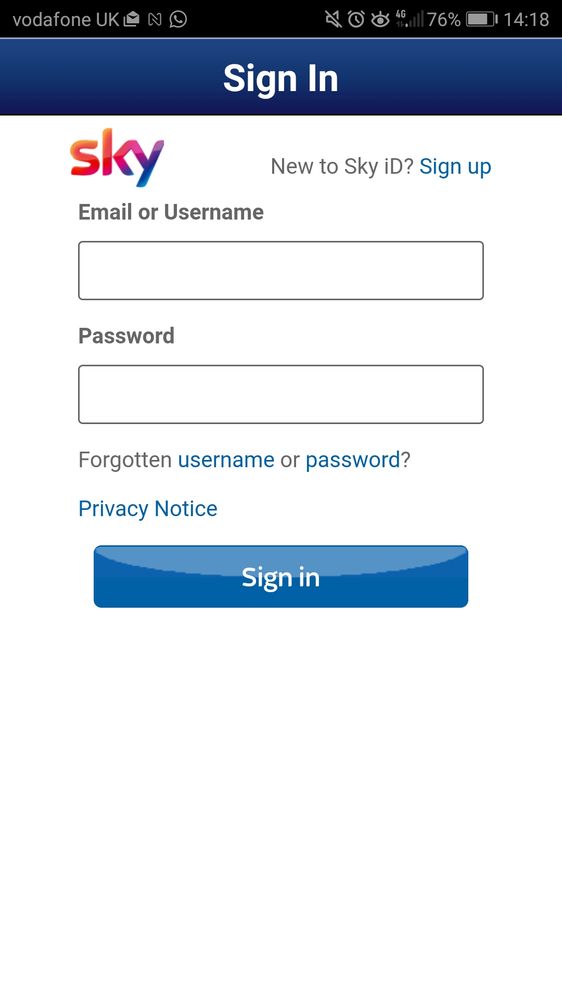 For all those having issues with their sky sports app. Check if you are paying for your subscription. I did and realised someone had taken it off at Vodafone even though their "help" desk looked into the issue and didn't have a clue what they were talking about. It's more than likely it has been cancelled.... so you just need to re-subscribe to it and it should work.

Don't fall for their excuse of something being wrong with the app or sky!

I am having exactly the same problem. I have a red entertainment bundle that is supposed to include my choice sky sports premier league football, but I can't get anywhere without a sky account number which is impossible to get unless you have another sky subscription of some sort which I do not have and do not want. I feel really angry, I am just batted back and forth between sky and vodafone and I am getting nowhere.

Despite the claims made that it has been resolved - nonsense! So much for being able to watch the man city vs Liverpool game! 😡😡🤬

I am having the same issues. Can you please send me some details?

Well after 40mins on hold, I eventually got through to technical support who refreshed my account completely and it now all works.

I don't know if anyone else had the same as me but the first time I registered for the red entertainment, and then chose sky sports, I didn't recieve a confirmation text, however, after the "refresh" I got one instantly confirming the length of my subscription etc.

Although frustrating to wait so long, I would give technical support a bash via 191.

I'm glad you were able to get your access to the Sky Sports app back when you called @alimurdoch1.

So we can take a look into why you're stil unable to access it @Cclow, @GOLDENGRACE and @sings2009, get in touch by following the instructions in the private message I've sent you and we'll be in touch.

Hi, I’m also having issues with my Sky app with Red entertainment, would you be able to help?

I'm sorry to hear you're having problems with your Entertainment Pack @Mlevans91, so I can take a look into this for you and help to get you up and running; I've also sent you a private message over with details on how to get in touch.

Hi, Ive recently upgraded my Vodafone contract, same phone and number, got sky sports mobile again but now i can't log in... My subscribtion says i have it until 2020 but definately can't log in, so annoying, being batted back and forwards with Vodafone chat people who said it's sky's fault and won't be fixed for a week, this isn't good enough though, it was one of the main reasons i choose this contract...

Hi @Sfra6446 we'd be happy to look into your Sky Sports query. Please send us your details by following the steps on the private message I've sent you.

Why have I not received one of these private messages. I have had my contract 6 weeks and I am having all the same problems. I have spent hours on the phone already with vodafone and sky. Not 1 minute of football have I been able to watch..........

Hi @Sfra6446 we'd be happy to look into your Sky Sports query. Please send us your details by following the steps on the private message I've sent you.