We're still looking into the throughput/streaming issues and have already contacted a number of Community users privately to help gather some information and stats on affected lines (Thanks to those that have shared the info).

We're pursuing a number of avenues and are speaking to Netflix, SamKnows and other 3rd parties to try to pinpoint the source of the issues you're seeing. Unfortunately we may not be able to provide daily updates due to the nature of the problem and testing involved, but rest assured that this problem has the proper focus and is being treated as a priority.

@Phil It's not actually that hard to identify the source of the problem.  I'd intended to create a heat map based on speedtest servers in major UK cities.  I'd started on this when BT managed to drive a digger through their cables and so through no fault of VF my own connection is a bit up and down anyhow (not sure if they are moving the currently jury-rigged cabinet or planning on re-provisioning).

So all you need to spot the problem are a number of people around the UK who can run multiple speed tests and see where the line is where their speeds suddenly drop!  While I don't have the figures (explained above).  From Teeside I can connect at full speed to anything from Nottingham across to Birmingham, Liverpool, even Belfast at FULL speed but the moment I connect to anything south of that line, it's routed though London, and the speeds fall through the floor!  To the extent that while I can connect to VFs speedtest server in Rekjarvik Iceland, I can't reliably connect to VFs London Speedtest server!

*the idea for this came from trying to figure out how to gather relevant data without doing anything that could be even remotely considered to be "attacking" the VF network!.  Using a heat map and the data tables should give a very clear representation of the problem location (it's a sever with "londen" in it's title!).

The thing is there are people who seem to be completely unaffected by this. I have two friends, on in Leominster and another in Leamington Spa who get much higher speeds than I do on www.fast.com and both get full speeds to the Vodafone London server.

In somes tests I've been running the tracert output is identical for all of us apart from the gateway address yet still the considerable speed difference remains. Some people with the same gateway address as my friends do get slower speeds so it isn't just that.

Just to add an extra oddity... around mid January (actually 17th January) I was getting near enough full speed to everything including www.fast.com. This was around the same time VF were changing something to reconfigure my second VF modem (an unrelated issue) but that could be coincidence. A few days later it had slowed down again.

Yes, it's the very same issue I'm referring to @Anonymous

We're already looking into this as @Phil advised, however Iet me check if we still need further fault tickets.

I'll get back to you shortly.

So here is the update I have. So far nothing has been resolved but I've now provided information to Vodafone as requested to assist with their investigation. I've attached a zip file contining the full data logs I've send in CSV format and the graphs. when looking at the graphs remember that I joined Vodafone in mid April 2018.

You will notice a number of things from the data but it all points the the same thing, poor service from the Vodafone network in some form or another and a significant differences since November, for certain services.

Will see where we go from here and I'll continue to keep this thread updated as I get responses from Vodafone.

I don't believe Vodafone is throttling the service. I just beleive the network poorly managed and lacks the investment required to provide the service we all expect.

Thank you to everyone who has contributed to the thread and got such a response from Vodafone.

Working with our equipment vendor we believe we have identified an issue and our engineering teams are currently developing and testing a fix. We have details from a number of forum users and have identified one or two suitable test cases which we will be contacting the users about in due course. So far testing has looked positive but to manage your expectations, there are many factors involved when rolling out changes across the network and so when we do prove the fix, it may still be a number of days before it is cascaded to all our nodes.

Fingers crossed it gets solved for everyone else but first day with new provider today (EE) and running the same speedtests I get almost full line speed straight away and even to the "broken" Vodafone test server in London i get around 35M downstream and 19M upstream.

Can't speak for anyone else but the infrastructure changes they've made based off our complaints here have made a positive difference for me, on my 38 meg line I've been getting 37 meg downloads but was only getting 6 meg for Netflix since December and as of the 20th of Feb I'm getting 37 meg to Netflix. Top work everyone!

Hmm, no improvement on my connection this morning at 6am when I gave it a test. 64Mbps sync but only 15Mbps to Netflix/fast.com, the vodafone.speedtest.co.uk gave one burst to 34Mbps but then 2 other tests <10Mbps. Think broadband download files and Think broadband x1 stream ~34Mbps this morning also.

Single stream tests to a couple of my "known good" ookla/speedtest servers a solid 62Mbps - so max throughput.

Yes I appreciate @Phil - Phil Wilson's post where it may take a few days to propagate any fix across nodes, assuming they have started this process.

Would be nice to have an update from him - as otherwise we are just speculating and it doesn't help with my decision on alternative action!

Not impressed just gone live on 69Mbps Netflix speed test on fast .com 5Mps was getting 52 Mbps on previous isp, not really checked my other video sites apart from quick look at Prime which did not appear to play uhd, Video starts off pixelalated which I never got before so 30 day cooling off period I have got for service to improve and the the so called 10 day settling in period

Forgot to say useing own router Netgear orbi and tried the vodafone at first should have said this in my previous post.

Phil from vodafone has posted that they have found issues which they are in the process of running further tests. No one knows how long these tests will take or if they will actually resolve the "netflix" issues its anyone's guess at the moment.

Vodafone are not really sharing much information on what issues they found are and what they are actually doing to fix them.

Getting 43Mbps from normal speed tests on Ookla.

Switch to single.ookla.com and it drops to 6.85Mbps using Structured communications London server

However single.ookla.com gives 40Mbps if I manually select a Manchester server and 35Mbps for Bradford

Netflix test patterns within the Netflix app 6960 kbps where as used to maxs out at 16000 kbps that's on the uhd test card.

So I am not able to play uhd video, test again on fast.net 4Mbps.

40 Mbps Truespeed communication closest to me

I am on 80/20 connected to openreach modem which is then connected to netgear orobi with 1 Satellite, all my test are done by Wi-Fi which are down on previous isp so I am allowing 10 days or so for modem to settle.

"The wait is over. Now you can upload and download at the speed of light

Downloading a 100GB game usually takes hours, but with Vodafone Gigafast Broadband you can become a legend in minutes.

Yup. Thats what I get from Gigafast everyday !!! 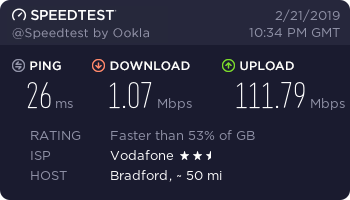 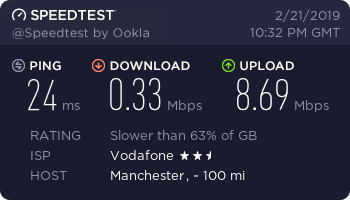 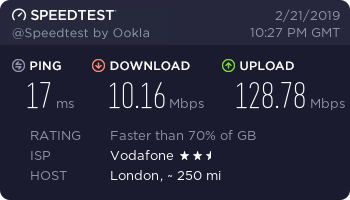 Having the same issue with netflix and prime. Just started after xmass for me. Tried splitting ssid's also happens on direct connected ethernet.  And Happens via range of end devices. Did the dns change as one online support suggested. All other traffic fine. And using vf hardware.

We're still looking into this issue in order to get it fully resolved. We're in regular contact with a number of you, so thanks for your support in helping the teams troubleshoot the issue.

We appreciate your continued patience and understanding and we'll post an update as soon as we have any more news.

My issue seems to be different to the others here. I did some further testing and found the ethernet cable i was using was faulty. Once i have replaced this direct connected iptv is working. So my issue just looks to be wifi related for which i am trying different channels currently.

Thanks for the update @j99323188, please let me know how you get on with trying different channels. If you're still having trouble, don't hesitate to get back in touch and I'll be happy to help you further.

i hope everyone does realize that while you are sat here uploading pointless speed test etc , it means you are not chasing ofcom who is a company that can take on a £52 billion vodafone company

we just want this fixed

sitting here uploaded speed test to a £52.5 billion company as of 10 February 2016 is a total joke and a waste of time  .vodafone will have paid departments that look into these things and will write scripts for call centre staff to follow

on the advice given by Ofcom  can customers having this issues please fill out this form so that Ofcom can monitor the issue, Which could lead to Ofcom launching an investigation into the company. if the issue is not sorted within a reasonable time

some other place you can also send the same story