I'm struggling to get help with this, I have been a Vodafone broadband customer since around June and have never had a decent connection to the cabinet and appears to be 'stuck' at 34999kbps. The line quality stats for the downstream doesn't look very healthy. The SNR is raised above the target of 6(?) I assume to attempt to remain stable be to my knowledge we have never had much of an issue with stability. Interleaving depth looks high and delay has been increased to 16 ms. I'm not sure if the line has ever stabilised after I joined Vodafone and it just needs a DLM reset or if there is a fault with the line but it certainly looks like I have been banded. 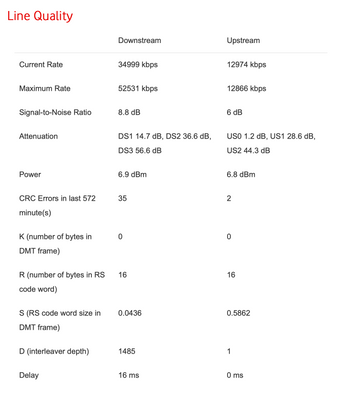 I have been on chat 4 times now but that hasn't been much help, one got me to change the DNS servers the others are interested in my internal setup or just not interested because I'm getting my minimum 35Mbps so they don't want to do anything about. Internally I have no extension sockets and the router is plugged into the test socket with a filter.

I appreciate I am getting the minimum speed but providing the bare minimum I don't think constitutes good service and I'm getting increasingly frustrated with the very poor customer service from Vodafone, I tried to call them but after 3hrs on hold I gave up. I'm not far from the cabinet and there looks to be scope for improvement I had around 45-50Mbps with BT so would expect the same with Vodafone.

Can anyone advise on my next steps, Facebook support is as bad as the chat and just stopped talking to me because they have met their minimum requirements. I just want to speak to someone who can actually understand the problem and help.

which router are you using

I cannot view the picture, so if this is a duplication, sorry....... 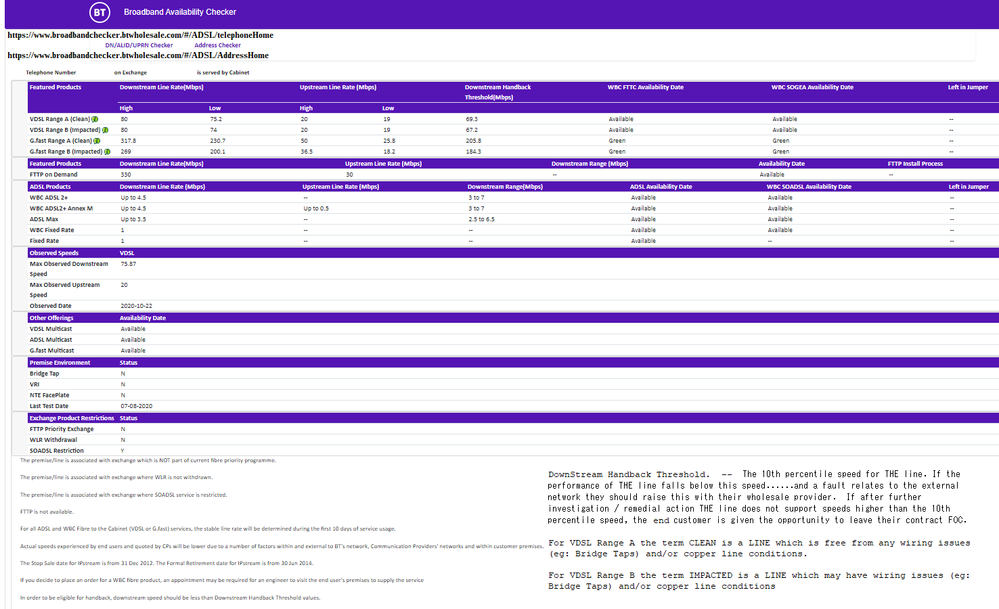 I can’t see the image you have posted either, the handback threshold is 34.5 clean and 30 impacted. Sorry I’m not sure exactly what that means, I would infer that my speed would have to be below this before it would be looked? 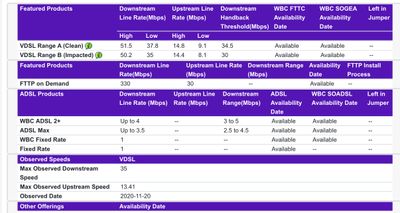 There definitely looks to be a problem with your line, I'm not an expert but I don't think I have ever seen a interleave of 1485.

Have you tried with it in the test socket?

I would never try to get a line problem resolved by chat or social media, I would always call.

Vodafone will need to do some tests on the line and the first thing they will ask you to do is plug it into the test socket so worth being proactive.

Thanks @jayach it has been in the test socket for a few weeks now. It was one of the first things they asked me to do. They want screenshots from speedtest.net now but I’m not sure what that will prove but I’ll continue to play the game.

I’ll have another go at calling and see if I can get a response.

It's interesting that you current upload rate is higher than the max rate. How is that even possible? May be that is significant. but I don't know how.

The Downstream Handback Threshold is...

Report a fault / problem with the speed.

If it cannot be fixed to support speeds above the threshold over a 30 day period,

you get a refund/reduction/option to leave FOC.