We live in rural country side of Clackmannanshire where there is no wired connection, and so the village relies upon 4G which it receives from a local mast up on a surrounding hill.  We all receive 100% reception and all have full line of site to the mast.

2-3 months ago there was a Vodafone outage with no 3G or 4G signal for 2-3 days, myself a neighbors registered for the Vodafone “keep in touch” fault resolution service and shortly after the signal re-appeared we received a text to say the issue was resolved, however all we receive now is painfully slow 3G from Vodafone, at just 0.2Mbps ish upwards.

If I swop the sim in my router to either of our mobile phone suppliers EE or 3, we instantly receive 4G at well over 65Mbps and this morning was 106Mbps, then if we swop the sim back to Vodafone, it’s straight back to 3G and an awful 0.2Mbps.

Upon taking up the contract with Vodafone my postcode was assessed as meeting the requirements for 4G, and we have in the past received a 4G signal from Vodafone, however as above there appears to be an issue with the Vodafone signal from our local mast.

Like many other people my wife and I depend on this 4G signal for working from home, where if this cannot be swiftly resolved (and for those in the village with Vodafone) we will be looking to close the contract and move to another supplier.

I’m an electronics engineer and have no issue with our receivership technology which is a TP-Link Archer MR600 Router, 4G-XPOL-A0001 Cross Polarised 4G Omni LTE Antenna, and a TP-Link Deco system.  Which further more clearly has no issues and we can receive 100+Mbps just be swoping to a different network.

The Vodafone website states no issues at our postcode and that 4G is attainable throughout and well beyond the area, but it’s clearly not, please advise how to move this forward?

1) Does the issue happen in just one location? If so, how far do you have to travel to regain service?  Issue happens where I live and where I also work from.

No tried all locations in the house, moving my router and LTE aerial around to test and eliminate signal blockages around the house, and I specifically have the unit in front of windows with clear line of sight to the mast hence 100% perception noted.  My router IP diagnostics page states 100% reception, and as per post I can receive over 100Mbps from other suppliers.

2) What is the full postcode

3) Does the issue occur if you try your SIM card in a different phone? Yes

If I use another sim the problem is resolved, with a relatively fast 4G signal received, if I switch back to the Vodafone MAX Unlimited sim I get 0.2Mbps with an awful 3G service (it still states 100% signal reception on my router IP diagnostics page, so issue not at my end nor is it anything to do with my reception from the mast, more so the signal type sent by it).

4) What errors are seen or heard when the issue occurs? slow or broken connection

Signal was okay earlier in the year, receiving 4G from Vodafone until a technical outage circa July, since then only 3G has been received and very slow as detailed.

5) Does this happen on 2G, 3G, 4G or all? All, internet via network is slow and useless

All other Networks certainly EE and 3 are fine, 4G received and at exceptional speeds, ie EE was providing 106Mbps today, however my Vodafone MAX was providing 0.2Mbps….

6) When did you first notice this issue? Several months ago and daily since then.

Issue started circa July 2021, been no change in poor speed, nor has it ever been classified as 4G by my router IP diagnostic page since then, always noted at 3G from Vodafone.

7) Is the issue permanent or intermittent? If intermittent, are there certain times of the day when it occurs? Permanent

As above permanent fault since issues in July, only 3G signal received from Vodafone.

Re messages above, today we are receiving 0.66Mbps from a Vodafone MAX Unlimited sim, again I’m meant to be receiving 4G as per Vodafone coverage map, but clearly not, Vodafone please advise how this can be addressed? 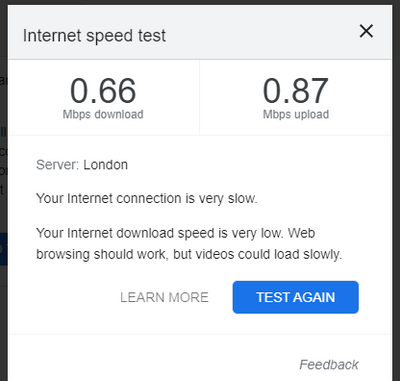 Hi @Greenmonster, thanks for that information. If you can drop us a message over Facebook or Twitter, we can take a look at getting this raised. When you send us a message, please include your Community username, this will allow us to locate this post. You can find the social media contact details here.