I'm an existing Vodafone customer having signed up through a 3rd party (e2save) on an iPhone SE 2020 contract costing £31 a month (due to end in 2022). I absolutely despise the battery life on the iPhone SE which is why I'm looking to upgrade early but to buy out of my existing plan would cost me around £450. Instead I decided to buy the iPhone 12 Pro 256GB Gold as an additional line for £73.95 a month (including a 15% discount) on the Unlimited Max 5G Plan and put up with wasting £31 a month on the SE (now more like £18 a month as keeping that line open is what gives me the 15% discount on the 12 Pro so deducting that discount from my iPhone SE plan means I'm effectively only wasting £18 a month...which I can just about live with. The lesson I've learned from this really is don't join Vodafone via a 3rd party as you don't get all the awesome bonuses such as the Annual Upgrade Promise. That was the key selling point for me for the 12 Pro, the ability to upgrade every year without having to buy out of my contract. Also I needed a new phone as the SE battery life is driving me insane...it's lucky to last 3-4 hours of screen on time (no joke). I don't like the idea of tying myself into another device for 2 years so this upgrade each year promise with no extra cost (just return old handset) really does appeal to me as it makes a 24 month contract more into a 12 month contract). My question, though, is the annual upgrade promise no questions asked providing you have good payment history or is it subject to additional credit checks each time too (i.e. no guarantee for people like me who have a sketchy credit history due to the past but have a good vodafone account history).

Vodafone i assume will have performed the credit check when the independent took your details so hopefully you should be good to go As long as you've been conducting the account well. The best way is to try.

Independents can give sweeter deals when signing up via them but effectively your then their customer with Vodafone supplying the network connection and collecting the monthly payment. Vodafone give the independent a kickback for opening up the contract.

Another option would be to remain in the contract or go sim only and buy the iPhone outright from Apple and I understand that would mean a person would need the disposable income.

Apple can look at your iPhone although over time a phone's battery screen on time /  usage will diminish but also sometimes a reset via iTunes and general clear out of old files,  apps etc can help. The iPhone comes with a 2 year warranty but even after that Apple would take a look at a Apple Store Genius Bar albeit at maybe a cost to replace the battery.

I have been approved for an additional line with the iPhone 12 Pro 256GB gold as stated in my original post. Once that's delivered (currently 2-3 weeks delay) the 12 month period starts from delivery I was told by Live Chat. So effectively next November I can upgrade to whatever next year's iPhones are. As this would be an upgrade, not a further additional line (unlike this year), do you know if they're credit checked in the same way?

Depending on when we last did a credit check @maxwilkes, we may need to do a new one before your upgrade. If you'd like us to double-check when your last check was, please free feel to pop our Social Media team a message here

It would've been done when I applied for my additional line a few days ago. I've read conflicting reports that upgrades don't require further checks providing you've handled the account well, and then others saying you may need a further check. I'd like to think that paying bills on time every month for the next 12 months would entitle me to upgrade to next year's iPhone which will most likely be a similar price to what I'm already paying.

EDIT: Just got through to an agent on Live Chat and got told this. This is now further confusing me as Jack (Moderator) said they may need to do a further check, my google searches have resulted in conflicting information where some say you don't need another check and some say you do. I asked Live Chat about it before and was told they didn't know so I posted here. Anyway I got a definitive answer from Live Chat today saying that you won't be further checked for annual upgrade promise.

But due to all the conflicting information I'd appreciate it if somebody could please tell me WHICH answer do I believe? I'd like to think Ravi (below) is correct but I'd appreciate official clarification. 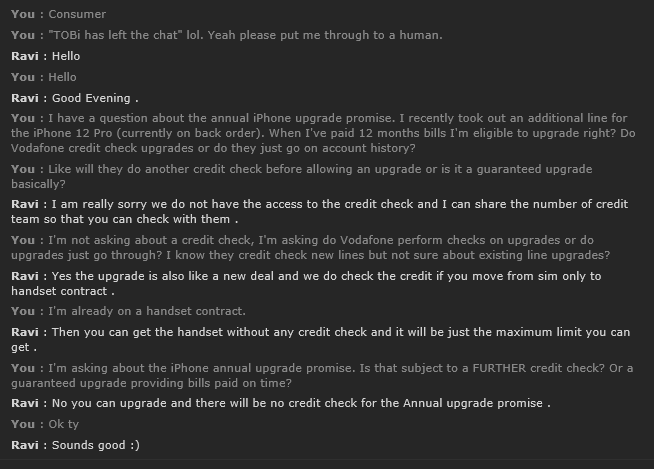