My home has recently started using Vodafone FTTC but the relative who ordered it did not apply for a static IP as I had requested.

Having examined the supplied THG3000G router it only appeared capable of using a very few DDNS resources. In particular it did not appear to have any facility to use Dynu which has given me excellent free service for several years.

My phone request for a static IP was dealt with speedily and efficiently.

However, despite an email early the next morning saying that the 'Static IP address is now active' it took most of the day to get it working.

At first I emailed the address in the public DNS but despite several exchanges they did not know why it was not working and gave the impression it was not their responsibility.

Phone support was polite but very slow - at one time I was left on hold for over an hour. I had the impression that very few support staff had any experience of these issues.

The IP changed between placing the IP order and being told it was active but no matter what I did I could not get the IP address in the 'now active' email working. Everything else continued working including my web server which I had manually primed at Dynu. All the indications appeared to show that the address in the email was wrong but I could not ignore it and risk an IP change disabling my server.

Eventually I was advised to manually reset the router which updated the IP but destroyed all my settings.

Does anybody know why it was necessary to do a hard reset of the THG3000G to allow it to work with the static IP? I am sure I have changed static IPs in the past without having to reset a router. If such a reset is necessary why did the activation email not say so? Why did most support staff not know about this including the DNS manager I contacted earlier in the day? Why did my dynamic IP continue working prior to the reset? If the router needed some input from my end why is there not a soft reset for this which would protect my router settings?

As you have found Vodafone support staff are very limited in their knowledge of internet matters.

I don't think a factory reset was needed, just a simple reboot or better still just a restart from the router's firmware interface to pick up the static address. 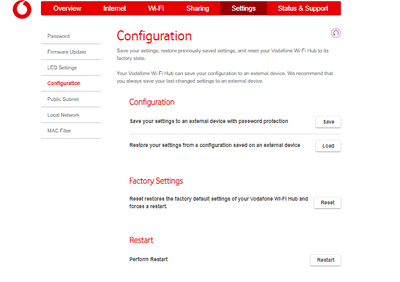 If you do make any changes to the routers configuration it is best to save them so they can be reloaded later. The option for that is on the same page.

I think the problem may be a little more subtle - just having a fixed IP address which I assume is already working will not give you the ability to run a trusted email server.  In order to do that you would need a PTR record for reverse lookup.  Historically some internet providers (mostly early adopters and enthusiast ISPs) provided this as a matter of course, however, Vodafone UK is not one of those ISPs.

Other than to some ex Demon Internet users, I don't believe Vodafone offer this as a service on their consumer products, but the only way to be sure would be to set aside an hour or two and try to talk to another CS rep!

*Not sure if this is of any relevance, but recently VF have changed how our routers identify gateways so that record now points to one of their servers and is no longer our public IP!

I've asked for static external IP's on two Gigafast systems, and both times support have come up trumps and activated the request whilst using on-line chat mode. Couldn't be more helpful.

But I agree with other users about the sad lack of DDNS providers supported by the routers, especially FREE and not having to log into the DDNS account each month for proof of life!!