There are probably a million and one other improvements, but having been using it for nearly a month It's hard to think back!

To be honest I have only ever used the pin option and hadn't really thought about the other ones, but it makes sense that it works with all security options.
0 Thanks
Share
View more options

Have now downloaded Lollipop and had a play! Not bad, still finding my way around it. Will give a 7 rating to start with until have explored properly. Took me 10 mins to find 'silent mode' by pressing volime keys but at least its there! Was great to transfer some app data to SD, clawed back storage space lost after 1gb+ upgrade. Couple of negatives:
1. No Close All Button' in Overview
2. Contact Photo has very poor image on opening Contact to dial.
3. Diagnostics button did not work so uninstalled and reinstalled only to find original app still on main screen as well as new one. Cant get rid off app that does not work, any ideas? Weird!
4. Probably just me but dont understand instructions to unpin a screen. Says touch and hold back and overview at same time but cant suss it out, can anyone help?
0 Thanks
Share
View more options

Regarding point 4: Yes it's litterally that, press back and overview simultaneously for a seocnd or two.

If you don't use PIN lock then the phone will simply unlock at that point. If you do use a PIN then it'll return you to the security screen. It's crazy that Pattern unlock (which has a PIN as fall back) is simply bypassed and the phone unlocked.

Sorry if I am being dim but where/what is overview?
0 Thanks
Share
View more options

Thanks. Had been trying that but couldn't get it to work, found that even a slight difference in the time between pressing the two buttons and it wouldn't work, it has to be at exactly the same time for mine to unpin.
0 Thanks
Share
View more options

Hi,yesterday i've updated my Z3 Compact to 5.02 and now no mobile operator name in the notification bar, just No Service. Any suggestions?

Thanks, have managed to unpin, was name of buttons that got me confused!
0 Thanks
Share
View more options

I've just updated my Xperia Z1 to this, not impressed. It currently hangs opening text message, took receiving a text message for it to open, SkySports app no longer works. it takes longer to open apps compared to KitKat.....

You may need to try a factory reset to see if that helps.
2 Thanks
Share
View more options

I didn't need to do a factory reset, eventually the phone was operating a bit more like it should; although the Sky Sports TV mobile app is still

(Removed according to House Rules) 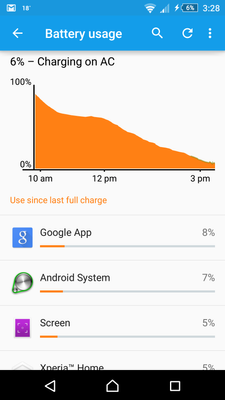 Since this update this morning my phone has dropped from 100% battery to less than 10%. In fact I have it plugged in and it's still dropping. Any idea what's up?

It's now totally drained and switched itself off! All this while attached to the mains using the original charger and cable. What the heck is going on?

Well apart from doing the usual factory reset and also rebooting your phone...

Have a look into uninstalling  or updating / checking Google Play Services app, as after I did the update to Lollipop yesterday; my phone acted as though it was running through treacle.

Apps were taking ages to open, after I tried going on Google+ it mentioned that I need to install Google Play Services (which I already have) so uninstalled and reinstalled, the phone then reverted back to a something resembling a smartphone !!!

I haven't really monitored if the battery is draining quicker since the update. Will look into this over the weekend

Well our phone is listed on the Qualcomm website as supporting it. Haven't try it myself.

The Sky Sports issue is because your device is no longer recognized as the registered device for the app. You need to contact Vodafone to have your original device setting deleted.

The battery drain sorted itself out after I fully charged it from dead without switching it on.

Everything seems laggy though, it's taking a couple of seconds to bring up the app tray, and the same again for texts and emails. Worryingly it's also slow to respond to calls.

I rarely have any lag issues.

I found a factory reset improved things a lot, but I still think Lollipop is a bit buggy. I'm sure it will improve over time.